Winning WSOP Circuit rings while simultaneously attending NHL hockey games, poker vlogger and WSOP bracelet winner Ethan “Rampage Poker” Yau continues to garner attention as he captures hardware and plays at the highest stakes. Becoming a regular on the popular Hustler Casino Live Stream, the aggressive play of Rampage on stream continues to draw eyes while also draining his bankroll. Getting loose head’s up with a suited ace, Rampage looked to get yet another bluff through with memories of his last punt surely in the back of his mind.

This video comes from Jonathan Little’s YouTube Channel. If you would like to stay up to date with more video content such as this, including hand breakdowns from Hellmuth vs Dwan, Daniel Negreanu, Bryn Kenney and more, click here.

Looking down at A♣8♣ under the gun (UTG), Rampage raised it to $600 as it folded around to his opponent Nik (big blind). Holding K♥K♦, Nik elected to call his premium pocket pair rather than three-bet. When facing loose, splashy opponents who like to get in there and fire, slow playing your premium hands isn’t necessarily a bad play if you know they are likely to bet into you. That being said, if you are facing opponents who don’t like to fold (like Rampage), three-betting pocket kings is the best play as it adds chips to a pot you will likely win.

First to act on the uncoordinated board, Rampage made a $500 continuation bet. While he elected to continuation bet, Rampage should have considered checking as the Q♠ connected with many hands in Nik’s range. Like preflop, Nik should have made a raise as Rampage’s range and aggressive style would have likely produced a call. Deciding to call yet again, Nik maintained patience to try and trap Rampage later in the hand. 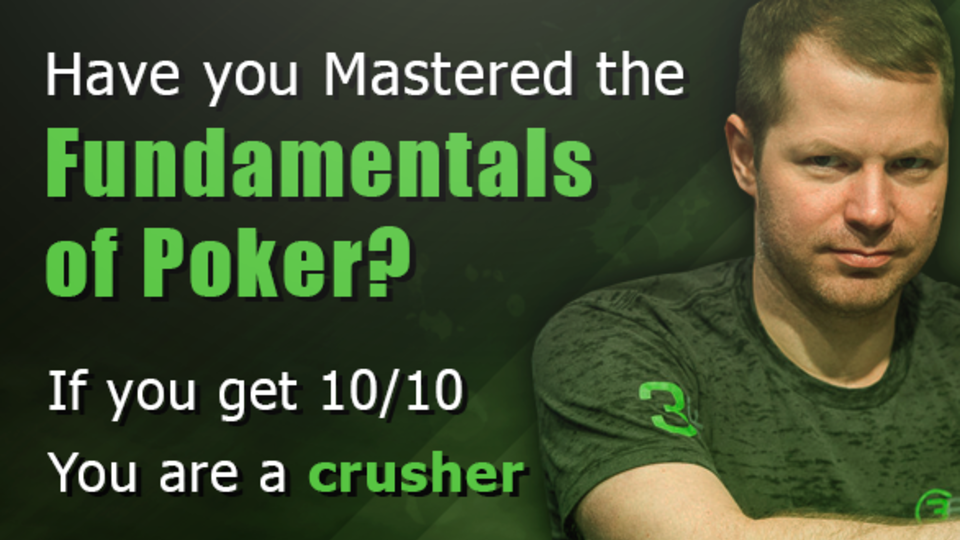 To play like a pro you must master the fundamentals. Click here to see if you have what it takes.

This time deciding to check out of position, Rampage would kick it over to Nik who would make a $1,000 bet. Looking at the small size of the bet, Rampage responded with a call of his own. With this board, Rampage could only rationalize calling if he thought Nik’s range was loose and contained a lot of nonsense. A GTO strategy likely has the A♣8♣ being checked then folded, but if your opponent has a tendency to act insane at the poker table, check-calling could be the right play.

Once Rampage checked the river, Nik should have been pretty confident he had the best hand. With Rampage having a lot of queens in his range, Nik could bet pretty confidently with his pocket kings and may have induced a call from the bracelet winner. Making a meaty overbet for $7,000, Nik effectively pursued value with his pocket kings and could have trapped any queen into calling.

Having absolutely no fear in his heart, Rampage bluff-raised $21,800 forcing Nik to make a decision for his entire stack. By ripping it in, Rampage represented the stone cold nuts as Nik had just made an overbet. Overbets rarely get raised on the river, being willing to raise over such a large bet represents nothing but absolute strength. Holding the A♣ Rampage effectively blocked Nik from having pocket aces, while he likely didn’t think Nik was holding pocket kings he almost certainly was targeting queens full of twos. To call, Nik would have to believe Rampage was making this play with a queen or a bluff, but could he find his way out of the maze the vlogger had put him in?

Exhausting his entire time bank and even exposing his cards to the man with over 100,000 subscribers, Nik would fold the better hand rewarding Rampage with a $33,000 pot. Pulling off what may be the bluff of the year, Rampage established his bluffing abilities for the whole world to see. While Rampage certainly got this one through, it will likely be hard to fool the rest of the Hustler Casino players down the road. Congrats to Rampage, and thank you to the Hustler Casino for letting us use the footage from this hand.