In the modern era of poker, it is easy to fixate on intricacies of the game that may stray away from where our affection for it comes from. At the end of the day it is about turning a profit, crunching the numbers at the table to make the right plays, and hit your ideal hourly rate. While the goal is always to play to the best of my abilities, I try to remember the aspects of poker that made me fall in love with the game years ago. When playing poker, especially tournament poker, if everything goes according to plan you will be sitting at the table for hours, especially at the WSOP. Everyone has different ways of passing the time when card dead, but for me I often look to those around me.

I’ve never been able to throw in the AirPods and get into a music-based “zone” at the table, but even if I were I feel like I’d be missing out on one of my favorite parts of poker: the social aspect. Poker is an activity that attracts people from all walks of life, a special component that allows participants to interact with fellow players they otherwise may never meet. The WSOP is practically a yearly, international convention for the game of poker, and with so many people from so many countries coming to compete, there is no shortage of new friends to make.

The summer continues to a bit of a tough one variance wise as I continue to experience bad beats at the table. As a student of the game, I look for the positives in the losses recognizing there will be long stretches where the game can be unforgiving. After busting the Colossus, I made my way to the WSOP registration line in Paris to sign-up for the following week’s Salute To Warriors event. As usual the registration line was extremely deep, which allowed time to socialize and mingle with some fellow players.

Meeting Veterans Of The Poker Game

After standing in line for a few minutes, I figured I’d turn around and ask the gentlemen behind me what events they were registering for. Behind me were Milan and Skip, two seasoned, recreational players who had busted the Seniors event and who were also registering for the Salute To Warriors tournament. 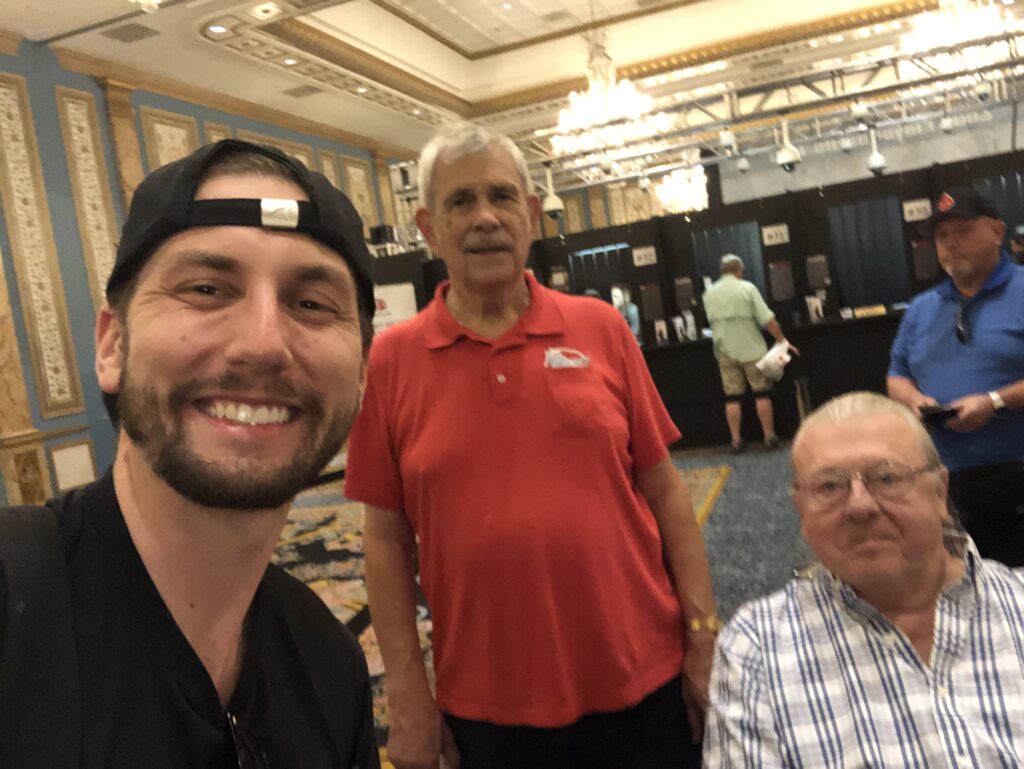 While I have played poker my whole life, there are players in the game who have been at it decades prior to my birth. Skip and Milan told me they both played their first hand of poker in 1958, when gas was 30 cents a gallon, Arnold Palmer had just won his first Masters, and Richard Nixon was serving his tenure as Vice President.

I enjoy talking to players who have played for decades as not only have they witnessed the growth of poker, but they got to take part in the true “golden age” of the game. Playing hands prior to when the WSOP even existed, Skip and Milan not only discussed poker with me but their lives. Skip told me how he played college basketball against my all-time favorite player: Pistol Pete Maravich, and I was fortunate enough to be at the table neighboring Milan’s in the Salute To Warriors event (he lasted longer than me). 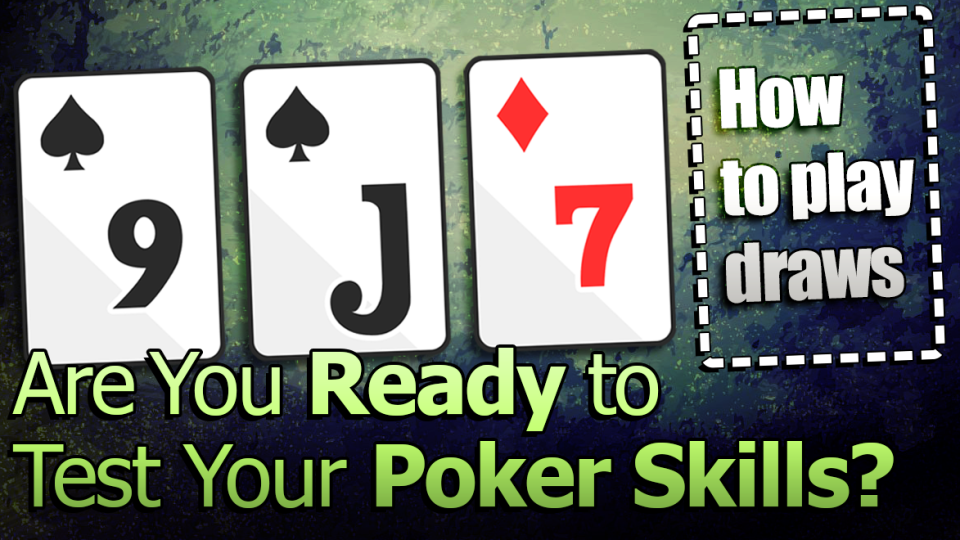 The Salute To Warriors tournament was truly a fun one to play and experience. Even though I didn’t cash (sad because it was my last WSOP event of the year), it was enjoyable taking part in the festivities and meeting even more players from around the world. After taking in the color guard from Nellis Air Force Base and standing for the National Anthem, the large field took their seats and cards were in the air.

It was business as usual for a few hands, until the British lady to my right exclaimed “you boys keep limping, has me starting to think you each need a little, blue pill.”

It was then I realized I had just discovered my new favorite person. 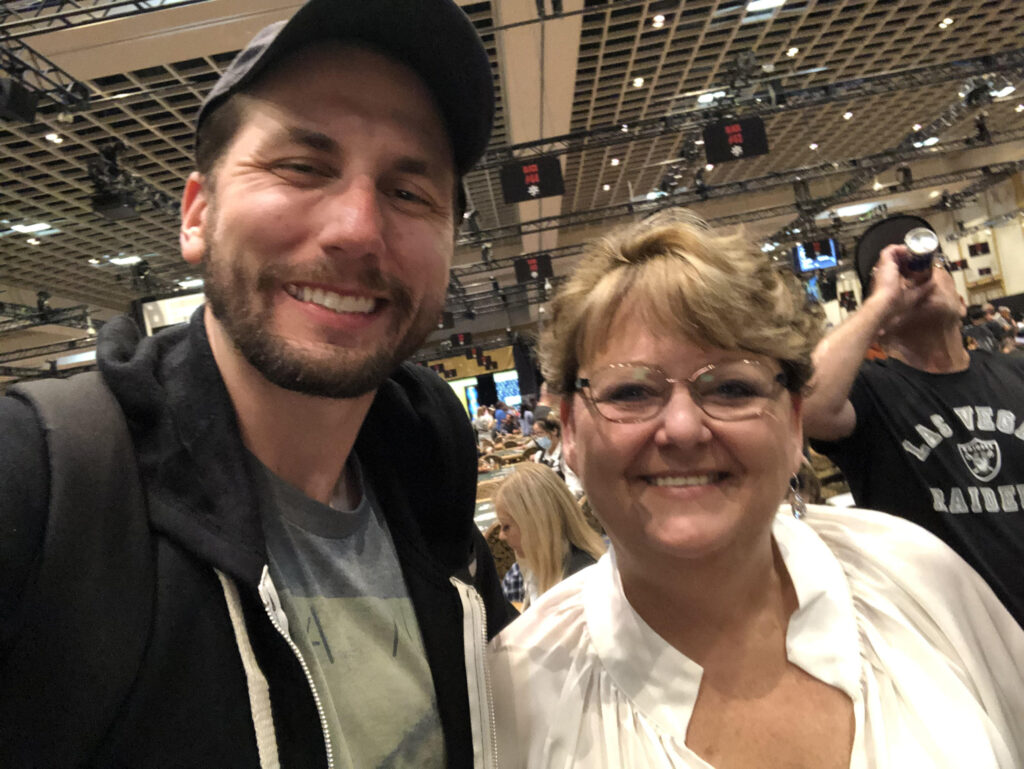 Julie, myself, and a Raiders fan on his 3rd Red Bull

Julie, who believe it or not was born and raised in Kieran and James’ hometown of Bournemouth, was an absolute delight to play with as we grinded the $500 buy-in event. With an extremely quick wit and passion for the game, Julie told me about the games she played at her current residence of Australia, as well as what her and her husband (who was also playing the tournament) were getting up to in Las Vegas.

A brutal set over set hand with thirty big blinds remaining would end my run in the Salute To Warriors tournament, other than the financial implications, I was most sad that my time playing with Julie had come to an end. Hopefully Julie and her husband make the trip to the WSOP again next year, and the three of us can grab a pint on me.

“Breath deeply, have fun, and play one hand at a time.”

With all three of us playing the Colossus, it was time for our own Kieran Woods to make his official WSOP debut. While I played the flight on the following day, Kieran made the trip to Paris/Bally’s with his British brother-in-arms James Meadows to take on his biggest poker tournament to date.

Recounting the experience, Kieran described how he wasn’t nervous at all on the way to the tournament, but was taken aback once he saw the size of it all. Seeing so many players making their way to and from the Colossus, Woodsy felt like it was a mass of soldiers heading into battle. Although he crushed it early and ran up a huge stack, he would go card dead for a number of hours before his pocket kings fell victim to pocket aces all-in preflop.

As any player would be busting a WSOP event, Kieran was a bit blue as he exited the Bally’s ballroom looking for an adult beverage. Finding a suitable spot to order a fruity cocktail, his night would improve as he too made friends around the Strip. Chatting with some Portuguese players at the bar about poker and life, Kieran also got to meet one of his favorite poker streamers from the UK. 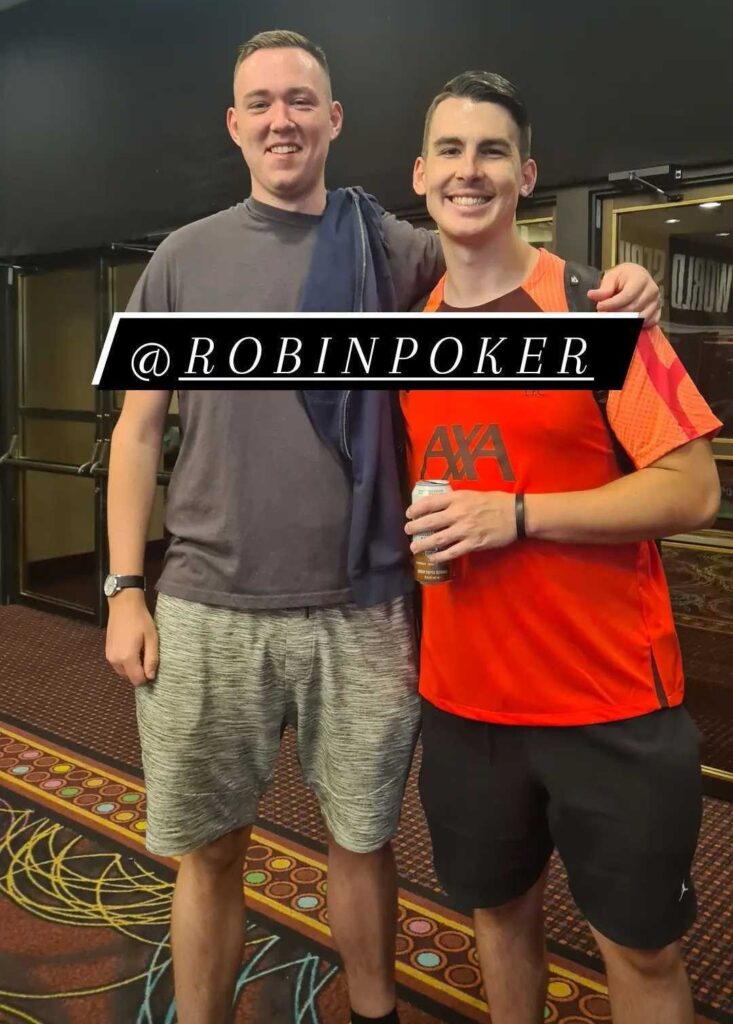 While it wasn’t another bad beat, I learned another lesson the hard way at what is quickly becoming my least favorite hotel/casino: Caesar’s Palace. Hopping into another one of their daily events (highly recommend playing them right now as they continue to hit max registration), the hand in question left me yet again wandering the Forum Shops, contemplating a meal at the Cheesecake Factory to cope.

With 16 big blinds remaining, I looked down at A-J offsuit on the button. As usual with these cheap daily tournaments, there were limpers aplenty (wish you were there Julie to set them straight). Following limps from UTG+1 and the hijack, when it was my turn to act I ripped it hoping my ace was at least live. The UTG+1 player (whose stack contained a lot of my chips) exclaimed “I think you’re trying to make a move” and called.

Following a fold from the hijack, we flipped over our respective hands, myself showing A-J offsuit, and the early position limper of course showing A-Q offsuit. I was already not thrilled at the unfortunate series of events, but dear reader it only got worse.

The flop came A-J-7 rainbow, and your favorite blogger thought his fortunes had finally turned around. Mr. Limper exclaimed to the table “of course that’s what happens, total bull****.” Being the fool I am, I replied “that’s what you get for limping ace-queen buddy.”

Queen on the turn, blank on the river, and I’m not gonna lie, I probably deserved that.

Despite having no more WSOP events left on my schedule, I’m looking forward to more adventures with the guys as well as taking part in some company events in the coming weeks. With two more weeks remaining, I may have just enough time to break even grinding some cheap daily’s.

Regardless, happy to share I was approached by a fan of the blog. I believe his name was Brett? 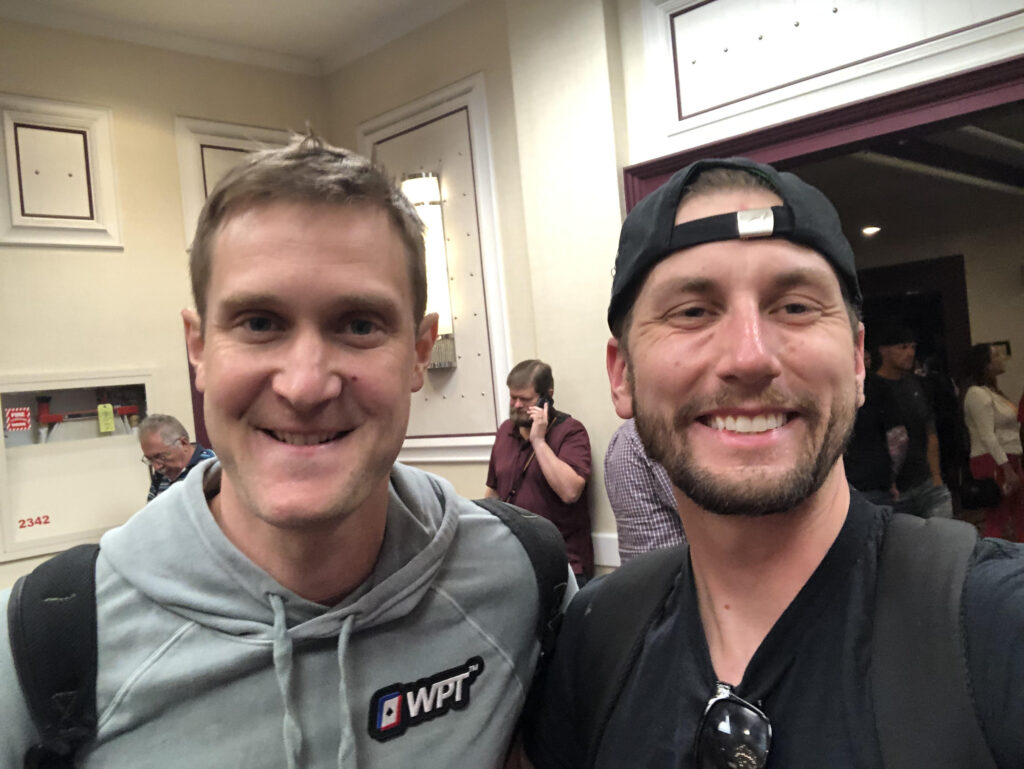 One of the greatest ambassadors the game of poker has: Mr. Brad Owen